Ms. Jackie of all Trades SpoolTeacher looks younger than her __ __ years in this picture because to get all the wrinkles out, she “cartooned” it twice in her picture editor. It’s a selfie, as if you can’t tell, but she’s quite pleased with how her glasses run in sync with the black tile behind her.

The real picture is pretty scary, so you’ll have to settle for this. The picture below is of her Red Gingham Dress (bias hem) and her feet a few pounds ago. Click the picture to read all about her adventures making it, the dress. 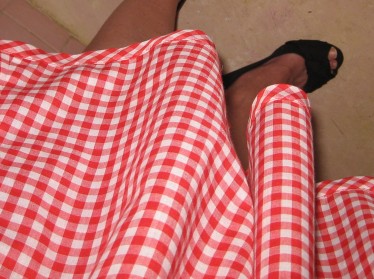 She created Eat Don’t Eat on Facebook as a place to discuss all of the things that are tantamount to her success in finding what she thinks are the things to Eat or Don’t Eat to be healthy, wealthy and wise and whereby she was able to find the formula to the success she has enjoyed in being food satisfied and at her desired weight without suffering.

She also posts adventures creating food from the items that she Does Eat and to date you can find her recipe for Super Anti-Inflammatory Salmon Salad/Dip here and Crock Pot Kitchen Sink Stew here. 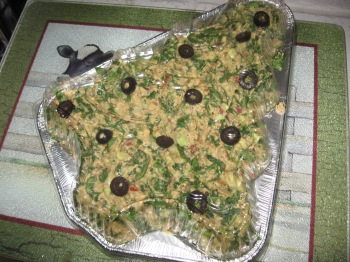 Ms. SpoolTeacher is a Designer by career profession, a Seamstress by passion, a Teacher by osmosis. She’s very intent on getting off the grid and loves to participate in anything that uses resources that already exist. 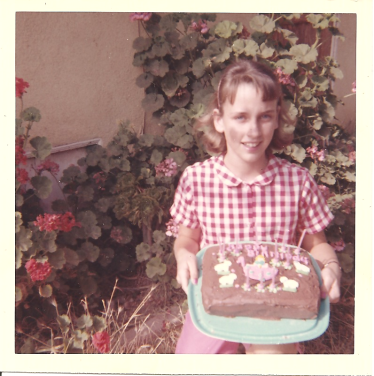 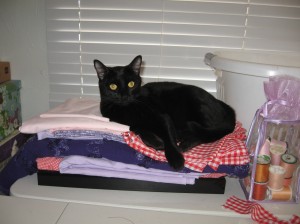 When she was about nine, she had the red gingham blouse she is wearing in the picture above and just loved it. She has had a passion for red gingham ever since. That was a particularly special time in her life as her babysitter, who made her that chocolate cake, favored her above her sisters and so many other memorable things happened at that time.

At age of about five, Ms. SpoolTeacher’s mother could easily see that her middle child wanted to be like her, a seamstress; so she put a needle and thread in her hands and gave her some bits of this and that and let her create whatever she could by pulling the needle in and out through layers of stuff.

What else would a child create but a body, and what resembles eyes, nose and a mouth?

She knows now that her mother played a big part in the creation because there are zig-zag stitches holding the “clothes” and “head” pieces together. The rest is hand stitched and was then stuffed with cotton balls. She still has this creation as well as a scrap of the original fabric. She remembers that all she ever wanted to be was “an artist”. Whatever that would evolve to mean. “The ideological expression of the mind”, she just this minute heard Art being described as on a show (Free Speech TV), streaming live behind this tab she is writing on.

Because of a string of life circumstances, Little Ms. SpoolTeacher would eventually parlay her love of sewing, art and interior design into working with clients helping them plan and execute all of the dreams and details they had for creating comfortable, beautiful living environments in their interior spaces.

The picture to the left is of her sitting in class for what was a 3 week, extremely grueling workshop/boot camp for learning all of the Standards of Measure that would give her the expertise required to be hired to consult with clients in their homes, planning all of their window covering needs for a large, nationally recognize department store. This would be the second time going through this school, for the same company. It had been enough years gone by from her first hiring to this second one that they wanted her to go through the class again, even though nothing had really changed and even though she had been working for years for high-end companies as a Designer planning windows as well as everything else. The training was fabulous, again, and only enhanced what knowledge base she had been working with up until then. 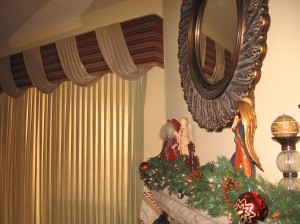 It was very difficult work though, getting all the ducks in a row that would manage the minutia of detail necessary to provide the non-English speaking workers the tools with which they could fabricate the items without mistakes.

She had many lovely clients and accomplished many “works of Art” that she felt great satisfaction in having a hand in creating.

(Click this link to see a sampling of her portfolio)

She worked for this company this time for a couple of years and then decided that she wasn’t going to be happy if she didn’t jump off the cliff and try her hand at doing what she loved as an entrepreneur. There were just simply too many limitations to creativity and too many manipulations by profit making moguls that didn’t honor her soul.

A Starving Artist would be what she was relegated to be, it seemed.

As soon as she left that job, she opened a brick and mortar to offer custom window covering products to a community that she would discover, all to soon, didn’t want and couldn’t afford what she was offering. At least not in enough volume to sustain her.

You must do your due diligence and she had taken off, flying by the seat of her pants. Many lessons learned, AKA: The school of hard knocks.

Ms. SpoolTeacher did have one Wonderful Client during those two years, (as well as a couple of other fairly great ones), that made it possible for her to relax for an entire year because Wonderful Client utilized her services to provide her Whole House: Las Vegas High-Rise Condo (read the story by clicking this link). with custom window coverings. She also hired her to shop with her for the supplemental furnishings which Ms. ST had recommended as well as others she knew she wanted, and to help with paint selection and furniture arranging.

It was one of the most fabulous “jobs” she had ever had and it was probably largely due to the fact that they had been life-long friends from the age of about 12 or 13…aaand, Wonderful Client didn’t have any issues with budget constraints.

She stayed a week to work there planning and then came back again a couple of months later for the installation of everything.

After that, though, she took a small break, (once she realized that Wonderful Clients were few and far between), and reopened as a Variety Store. She doesn’t discourage easily.

She then opened a little larger store in the same strip and called it Lollipops & Polka Dots (a long story why that name) and brought in everything she could think of that wasn’t already in her little (she says lovingly) Podunk town that she thought she could save her community the 50 mile trip to their nearest “everything” city to get.

“All things that are round and/or well rounded, up-cycled, recycled, useful, necessary, uplifting, whole.”

School of hard knocks again. “We love going into town for the day!”, and of course, Wally came in with their economy of scale offering her cost pricing for their retail pricing. You know that story, it is an American Story now. 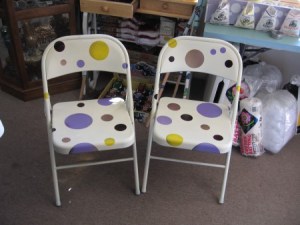 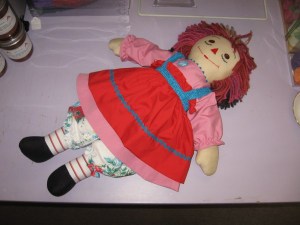 Her Variety Store was well received by the community. It garnered her recognition, social credit and integrity that has served her well. However, it still hasn’t been quite the ticket to support a physical presence.

Currently, Ms. SpoolTeacher is evolving, reinventing herself again. Most recently she has been given the honor of taking the helm of a vocational class teaching beginning sewing to young people. She couldn’t be happier and believes great things are going to come of this.

Being an entrepreneur requires that one be constantly able to morph into that which will meet the needs of those supporting (funding) the endeavor. Being an entrepreneur at heart means no looking back, it isn’t possible (almost literally) to become an employee again. A contract employee is almost like being ones own boss, so is a little more tolerable.

An entrepreneur is a servant among other things.

At any rate, while she was “failing” at that endeavor, she wasted not a minute and made lots of things to either sell or exist in her repertoire of samples of things she can teach.

Ms. SpoolTeacher’s goal and hope is to someday be able to fully support herself doing what she loves, mostly creating something, most frequently through the media of fabric. But in the mean time, she does whatever it takes. She cleans houses, mends, alters and repairs clothes for clients, teaches computer skills to those less skilled than she is, makes things to sell in her Spare Shelf Shop on Etsy, works to help clients bust their clutter or re-fashion their existing furnishings to a better configuration, carts her elder neighbors to and fro and any other thing for which she has a skill or there is a need.

And in so doing all of these somewhat disparate things, she has created a moniker to brand herself with and refers to herself as “Ms. Jackie of all Trade SpoolTeacher”. She practices “ConSewVation” and is still a “Peripatetic Designer” in her soul of souls.

…aaand she loves to make baby shoes in her Baby Shoe Spool Factory, even though they are tedious and hard.

She’s a Flower Power Girl who came of age in the 60’s, which has simply made her a girl who loves all things that are round and/or well rounded; up-cycled, recycled, useful, necessary uplifting and whole.

She loves to work in the garden but is in a desert so has been spending the most recent years since she has been here from “grow-anything-California”, composting and amending her barren soil/dirt and trying to create her own food security.

Her Lollipops & Polka Dots Variety Store had the most success selling treats and food for cats and dogs. People will spend anything to treat their “children” well. Ms. SpoolTeacher will go without to make sure they have the better foods.

She’s a hippie, Hippie Girl. And a Happy, Happy one at that. 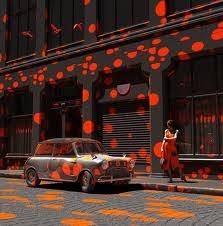 Ms. Jackie of all Trades Master of Baby Shoes, among other things! decided to open a whole ‘nother blog to talk specifically about other things, including things about designing and fabricating custom window coverings. It hasn’t been fully developed, but is one of her bucket things. Maybe. She’s kinda gotten bored with all that (rich people) stuff unless you want to hear about it, i.e., you want to know how to become a designer, you are one and want to learn custom window covering Standards of Measure, Fabrication, etc. or just want a forum to hash things out, or etc., etc., etc. Comment if you do. Here or there http://msjackieofalltrades.wordpress.com/. Thanks.