Oh in about 2002, Ms. SpoolTeacher decided that she had had enough of juggling finances to stay on top of the can of worms she had opened for herself. A childhood friend had come to visit her and talked and talked and talked to her about a piece of land he had in Northern California and how much he loved it there. He shared with her his dream of putting a Quonset hut on it to live in. He got out his hunting/sporting magazines and showed her what they were and how he intended to use one.

If you remember, Ms. SpoolTeacher had made most of her life long earnings doing “Design” work helping clients furnish, decorate, remodel their homes. This whole idea of designing a living arrangement from scratch with a metal can (so to speak), to say the least, intrigued her. Before long she was chomping at the bit.

They decided they would try to develop the land together. He had the land, she had a little capital.

Sight unseen, she packed her truck like The Beverly Hillbillies and off they went. Literally, there was a chair hanging off the back of her truck.

She had two dogs, two cats and a two room tent. Jack (not his real name) drove the truck, she drove the little car. Cats and dogs all over. None of them happy. All of them on medication to make them groggy. They drove and drove and drove.

And drove, and drove and drove.

In the middle of the night, Jack delivered her to a little travel trailer at a friend’s house and she and the critters collapsed in cuddles.

The next morning when she looked out the trailer window to see a forest of trees, she panicked, “WHAT HAVE I DONE!!!!” All of a sudden her pioneer spirit escaped her and she felt dread and fear. She felt homeless.

Of course, it didn’t last long.

Before long, they were at Home Depot getting wire fencing to make a yard for the puppies. The kitties were imprisoned in the tent (for as long as the zipper on the flap lasted). As it turned out, kitties don’t like to scale wire fencing and Peter Rabbit just sat inside the fence with the dogs looking at him sullenly, until the dogs made their magic get-away hole. Annie lodged herself in the mesh on the ceiling of the tent and managed her magic of never being seen again, (until they quit and went back to Southern CA).

But by the time they were ready to quit the project, the Quonset Hut was being delivered.

She packed it in a U-haul and brought it back down to Southern CA with the four critters on drugs again.

And a few months later she packed it in a tractor trailer, with all of her other worldly treasures, and brought it and the four critters, the car and truck,  to AZ to try a different adventure near her sissy.

She has had it now for 11 years and has moved it, finally, never having been set up, to her current property and it lays there in pieces waiting for the perfect opportunity to “Design” a living arrangement whereby she will be able to see that original imagination come to fruition.

She’s always thought they look space-aged and awesome sitting out in a field with the sun streaming off of them, gleaming. The ones she visited before she purchased hers were usually for barns or vehicle storage and weren’t insulated so were either scorching hot, or freezing cold.

All she cares about is that she may have a little piece of land, her “tin-can home” and a swath of land to permaculture garden with critters to collapse in cuddles with at the end of a hard days work. Freezing or scorching, she’ll find a way to survive. As long as she can plant and think and feel like she is free.

This is what hers looks like, but it is only 30X30X14H, skylights, end walls with garage door size openings.

She’s got a home now and is happy. But someday, she’d like to just erect this thing to see what she can do. It helps her get up every day, having a thing to look forward to. 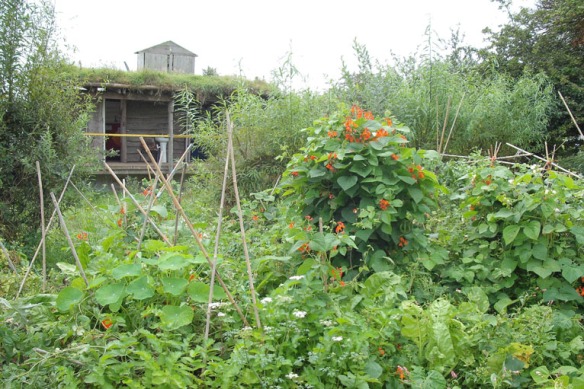 1 thought on “Canning and Freezing”