So, the idea for this crocheted blanket was inspired by watching Darlene Michaud‘s video about making a scrappy afghan. It was started with whatever was on hand, (mostly things purchased years ago for making Raggedy Ann hair). It was quickly realized that that would not be enough. Because thrift stores were closed that minute and there was an urge to continue rows that would integrate new colors without waiting any longer, some selections from Walmart were procured. 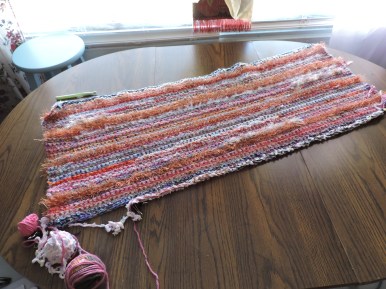 Soon enough, a hoard was brought from two thrifts to consider for this project along with the Walmart offerings. At first, it didn’t seem desirable to use second hand yarns of which there was no way to know of where they came, (animals, hair, smoke), but realizing the thing can be washed — so it advanced. 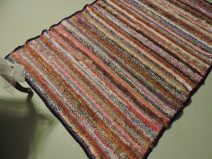 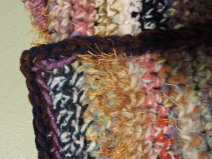 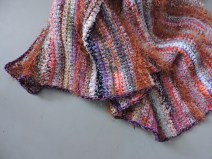 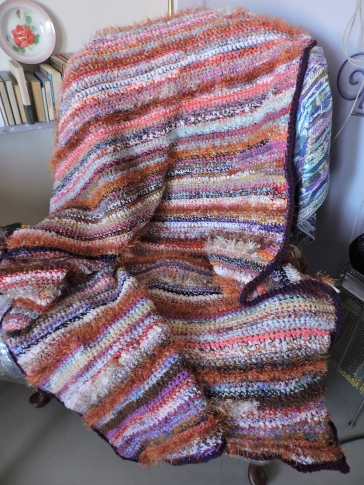 A row of slip stitches were done in a purple with a glitter thread running through it combined with a maroon. Did she forget to tell you that the whole thing was done with two strands of yarn all the way through? It was. It makes for a very heavy and tight warm blanket. A single crochet was used as well, all the way through, except for the starting chain and the row around the edges for the border, which started with the slip stitch. The single crochet to finish it off was with the maroon and a navy, single crocheted.

It might be made better proportions with a few more rows of width and that could always be done — but, as it turns out, this is wanting to live in the mudroom and works perfectly great as a blanket while lounging on the sofa watching VHS movies in that little comfort room.

After finishing the crocheted blanket and realizing it wants to live in the mudroom, another blanket was wanted for the bed. After utilizing old housecoats as a temporary fix, the idea to make them into a blanket, patchwork style, seemed to be a perfect solution. So here we go with that adventure.

First to do was to take them apart to retrieve usable flat fabric for making patches. Everything is saved for doing something else with as ideas unfold — and they unfold as the cutting is ensuing. 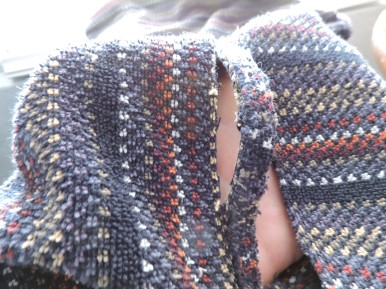 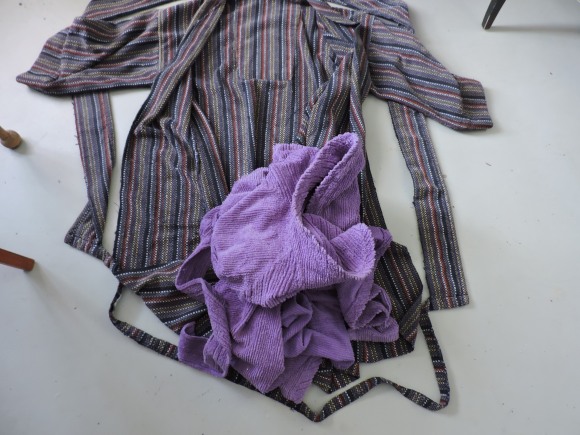 The larger image in this grid is the flat pieces that can be used for making patches.

The seams have always begged for using to create fringe. There is a bag somewhere just waiting for a project like that and these can be added to it.

The cuffs on the sleeves turned out to be just the right diameter to go around a head so can be imagined to be used for warming ears. A piece of elastic might make it more convenient and they could always be trimmed up with embroidery or some sort of embellished or passementerie. 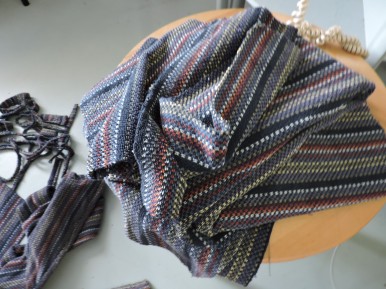 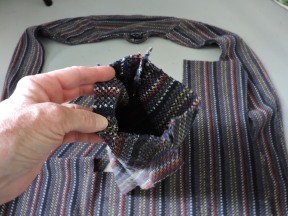 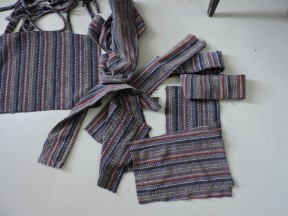 These days approaching spring are a little unpredictable, as all weather is it seems. Recently chilly temperatures have been begging for more and warmer blankets so that the heating bill can be a little less.

The purple got cut out last night and everything went into the sewing room where it could be closed off from any curious kitties. 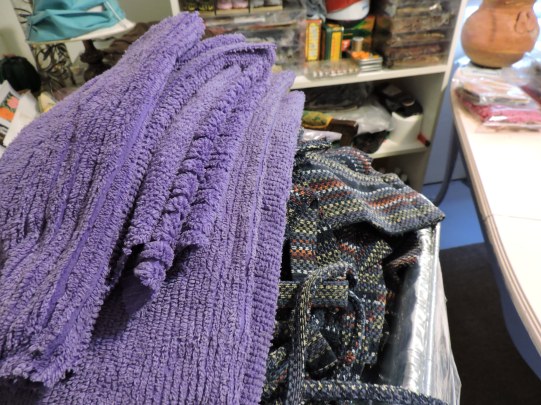 It will be fun to see where this all ends up. Original thoughts were of doing a ragged edge for seaming, but instead it is going to be flat felled so that it will be a little more reversible.

Trying to make little house comforts with what there is in stock in the little house. Both of these housecoats were second hand to start.

And so the story goes.

Thanks for stopping in.