Can anyone guess what these are? 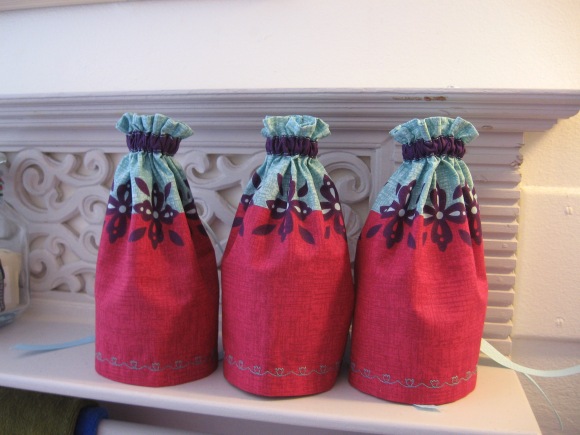 What started as a sheet and a dust ruffle, became an apron. But these are not the apron.

The commissioner of the apron left the fabric behind the gate at Ms. SpoolTeacher’s house and called to leave a message that she had done so.

Lions and tigers and bears, OH MY!

At some point the commissioner of the apron had lead Ms. ST to believe that she didn’t like ruffles. But after Ms. ST mocked up a version of the apron the commissioner had shone her a picture of and Ms. ST had made a flounce instead of a ruffle at the bottom (since flounce was in the picture), but had had a hard time making said flounce because she had no pattern and had had to try to invent a flounce and proceeded to use a lampshade to make a circle that she thought might be enough of a curve to make the flounce flounce once it was stitched in a straight line…

(does anyone know how to convert a straight line measurement into a diameter???)…

the commissioner said, “I don’t mind if it is a ruffle.”

And she thought to herself, “That flounce was a lot of trouble and didn’t turn out like I wanted it too, a ruffle…now that is an exact science that I already know.”

The commissioner liked everything else about the mocked up apron. She, who isn’t gingerbready at all like Ms. ST is, said, also..”You can even put on rick rack if you want, I don’t mind.”

So, Ms. SpoolTeacher set about designing, in her head, just how she might use the sheet and dust ruffle to fashion the commissioned apron.

She cut the main part out of the turquoise sheet as she imagined that the pattern on the dust ruffle would be better used as trimmings, (gingerbread, you know).

She used her ruffler foot to make the dust ruffle ruffle and then stitched it in place on the bottom. (she doesn’t know why she hasn’t used that fuffler foot all these years and only discovered it because she had to make a mile of ruffles for another lady’s dust ruffle)

Because she had used most of the dust ruffle to make the ruffle on the bottom, the waistband and the ties,

and because the big pocket on the bottom was bigger than the piece of the part of the dust ruffle that was left, she had to devise a way to make it cool and splice some things together..

The top pocket fit just fine without splicing or dicing..

So that’s the story, from front…

..except to answer the question that we started with… 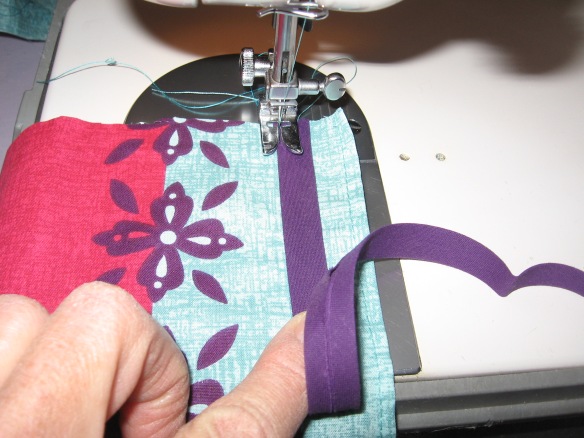 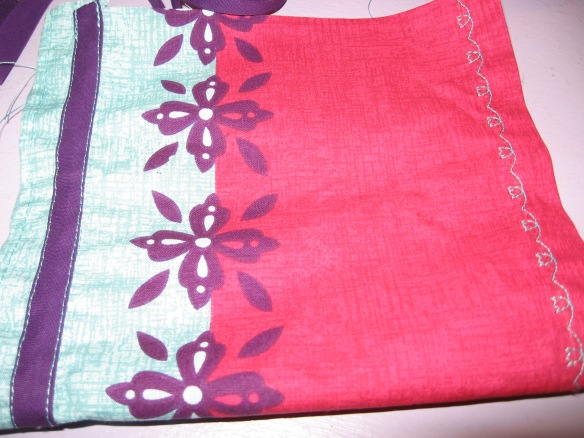 Wait, are you ready? Do you know?

Don’t tell anyone. It’s a secret for the three little girls for Christmas who have dubbed Ms. SpoolTeacher as “Doc Mcstuffins” for performing spool-surgery on a couple of pet stuffed critters.

So there ya go.

Keep it a secret now.